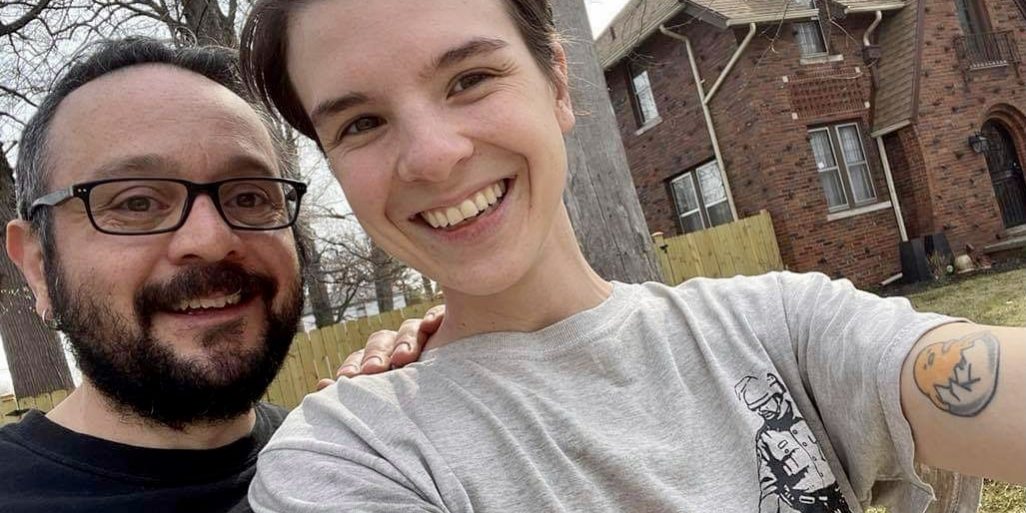 Like perhaps most people, when Mike and Emily started looking for a home, they had a list of things they were looking for. After living in “tiny apartment in Hamtramck,” they wanted space “inside and out” for themselves and their dogs Clark and Lola. They wanted a house that didn’t need much repair, and that was within their budget. They wanted to live in the city and they were “looking for community, but they weren’t sure where to find it.” They got outbid a few times, and they looked at houses that needed too much work. After six months of looking without much luck, Mike and Emily were getting pretty discouraged. And then they found it.

GETTING TO KNOW GRANDMONT ROSEDALE

Originally from rural Michigan, Emily’s introduction to Detroit was through a professor-friend who lived in Grandmont Rosedale. Mike has known Grandmont Rosedale his whole life. His parents’ first home in the United States after emigrating from Syria in the 1970s, was in Brightmoor. Mike’s aunts and uncles lived nearby, in Grandmont Rosedale. Mike and Emily were familiar with the beautiful Grandmont Rosedale homes, and when they finally found an affordable, well-kept home in Grandmont #1, with a side lot, they knew it was the one. The previous owner, former GRDC board member John Bry, knew his neighbors, and was “happy to sell the home to people who wanted to get involved in the community,” according to Mike. “The house checked all the boxes,” said Emily.

The two met when they were both working at Write a House, a now defunct non-profit that combined community building with support for the literary arts through awarding homes to Detroit writers. Now Mike teaches a variety of sociology classes at Oakland University and Macomb County Community College. He’ll earn his PhD this May with his dissertation focused on how tax foreclosures in Wayne County and Detroit have become a racialized process. Emily works as a program manager and organizer for Planned Parenthood. Both have been working remotely for the last year, and so the extra space in their home has been welcome. Their dogs are especially fond of the large yard.

BECOMING A PART OF THE COMMUNITY

Mike and Emily knew they had found their home when the two were out shoveling last winter. A woman drove by calling for her dog. Mike offered to keep an eye out while he was shoveling. He got her number, the name of the dog, and went back to clearing the snow. Another neighbor came by with a dog asking “Do you know whose dog this is?” Mike called “Come here, Charlie!” and the dog came running. He called the neighbor and told her “I got your dog!” “We were all outside, yelling through masks, introducing ourselves,” Mike remembers. “The dog belonged to a 17 year old girl who was so sad about losing him. Her dad couldn’t thank us enough. It was a heart-warming moment.”

Soon after moving in, Mike posted how happy they were to have “found such a beautiful home in such a beautiful neighborhood.” Grandmont #1 Improvement Association president Oliver Cole saw the post and brought over two new Grandmont #1 t-shirts to welcome Mike and Emily to the neighborhood. Lots of space? Check. Lots of yard? Check. House in good shape? Check. Sense of community? Check.