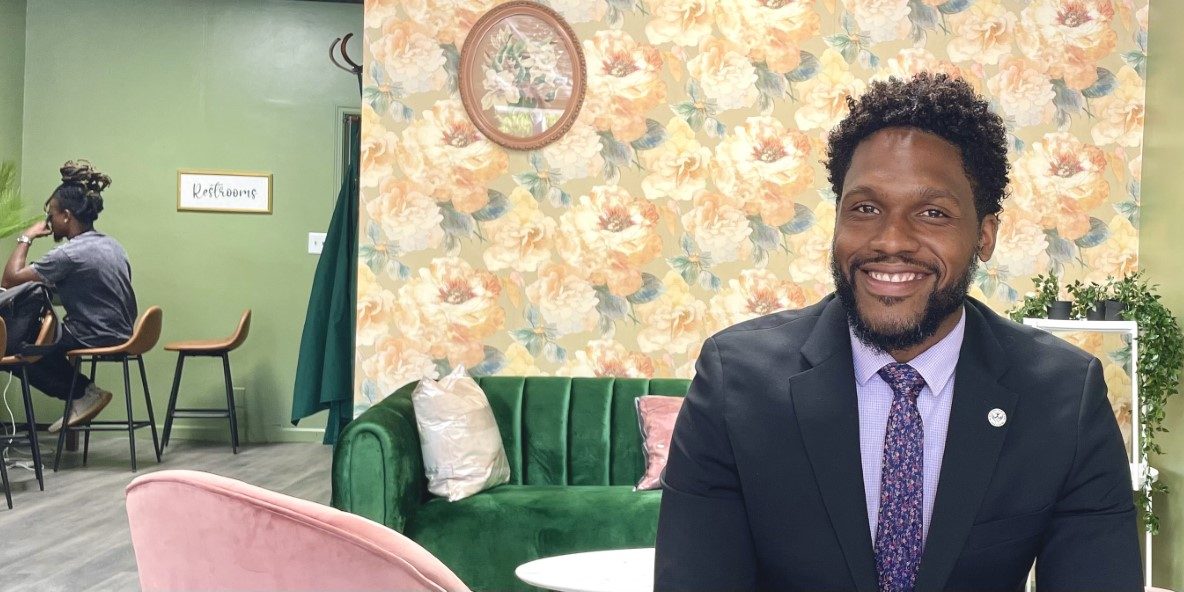 When GRDC’s Executive Director Mike Randall first moved into Grandmont Rosedale, he saw the similarities with Ypsilanti, his home town, and Detroit right away. According to Mike, both Ypsilanti and Detroit are filled with people who are “hard-working, friendly, and have a lot of pride for their city. People go hard for Ypsi, just like they do Detroit.” Mike came with a host of qualifications and relevant experience from a number of organizations, but it’s the understanding of what, and more importantly who, GRDC is that makes Mike a great fit.

GROWING UP THINKING ABOUT COMMUNITY

Many children grow up dreaming of being an astronaut, a professional athlete, a doctor, or maybe a great inventor. None of these were on Mike’s list as a child. While he may not have had the language, “Executive Director of a non-profit community development corporation,” this is in fact where Mike has been headed since his early days. When he was a child, Mike built towns out of books. He then populated the stacked and arranged books with people, cars, and streets. “It was city planning at its most basic level,” remembers Mike, “I could do that all day. We read the books too.” Mike is the number four child in a family of six children. Mike’s mother worked the line at a supplier for the Big Three, specifically on luggage racks for cars and then moved on to a position as a Department Manager at Von Muar. Mike’s father is a chemist who still works at a waste water treatment plant. Mike’s father has a deep understanding of infrastructure and the dedication to do an important job well. Lucky for Mike and his siblings, their father shared his thinking about the importance of infrastructure, community planning, and building according to need. These thoughts most often began with his father announcing to his six children: “We’re doing a lesson!” A topic might be bridges – how they are made, what they are made of, their different uses, and where it makes the most sense to build them. There was a chalkboard to accompany the lesson, and the children took notes, asked questions, and followed up with some research. “It was a very macro perspective,” Mike says. The lessons on bridges, roads, sewer systems are also exactly the kind of thing that children get excited about. Mike’s home was the kind of place where he could take up the entire living room floor building a city out of books.

CREATING ON HIS OWN

Mike’s early focus on understanding just how communities are organized, what can go right, and what can go wrong eventually led him to the University of Michigan Dearborn where he studied Urban and Regional Studies with a concentration in Environmental Design and Space. With his degree in hand, Mike graduated during the recession. He took work where he could get it: the Washtenaw County Public Health Department. While he had planned on working in housing, a co-worker was a Master’s graduate in Urban Planning from UM Ann Arbor. She became a mentor who applied her planning skills in the space of public health. Mike too discovered that the skills he learned as an urban planner were not just applicable in a public health setting, they were extremely relevant and effective. Eventually this lead to Mike’s most previous position as the Senior Director of Community Health at the American Heart Association (AHA), a non-profit dedicated to being “a relentless force for a world of longer, healthier lives.” While with the AHA, Mike did health equity planning work which involves working with municipalities and city planning departments to develop ordinances that create green spaces, bike paths, safe routes to schools, and the removal of blight – all geared toward creating environments that are conducive to health. This work also allowed the AHA to partner with organizations that develop affordable housing. Social determinants such as the lack of safe, affordable housing are major determining factors in the development of chronic health problems like heart disease. Some other stops along the way to GRDC include Habitat for Humanity, the Ypsilanti Housing Commission, the Ypsilanti Township Planning Commission, and the Ypsilanti Library Board. Mike’s Master’s degree in Urban, Regional, and City Planning is nearly done. Mike’s curiosity and drive to learn more has changed venues since those early lessons at home, but it has not waned.

COMING TO GRANDMONT ROSEDALE AND GRDC

When Mike and his wife Alaina had their son Phoenix, Mike and Alaina knew that they wanted to raise him in a house with a yard. Mike and Alaina weren’t just looking for a house though. They were in the market for a neighborhood, a community. While at AHA Mike was working more and more in Detroit, so they started their search there. Mike knew what he wanted in a house: “I love historic homes. I wanted the floors to creak, mature trees in the neighborhood, something with character. Something well-built.” While Mike and Alaina looked at a few different Detroit neighborhoods, they chose Grandmont Rosedale in 2018. For the last four years, Mike and Alaina have come to call their neighbors friends. “I adore my neighbors. They all have children. We share lawn equipment, and we tell each other when we’re going to be out of town so others can keep an eye out.”

When Mike learned that the position for GRDC’s Executive Director was open, he “was interested immediately.” Luckily for the GRDC staff, board, and the residents of Grandmont Rosedale, Mike’s experience and enthusiasm for the chance to help create community won him the position. “To directly impact projects that impact the people of the community is exciting. GRDC is the ultimate in community development,” says Mike. “GRDC’s effectiveness derives from the trust that our community members put in us to find solutions to community issues and execute those solutions.” Mike continues to get to know the community both as a resident and as GRDC’s Executive Director. “The passion for our work that my staff, the volunteers and the board members have is very alive and real. There’s so much energy toward a common goal. And that’s how we get stuff done.”

Creating community is indeed a strategic, exciting, important enterprise. It’s also difficult. Mike knows this and enjoys the challenge. Mike eagerly dove into the renovation of the Outer Drive apartments and the creation of new, mixed-use senior housing, our biggest projects yet. Mike also recognizes that community always begins at the micro level. Mike got together with several of his neighbors to clean along the freeway service drive that runs along the backs of their yards. “So many solutions are possible when people communicate,” says Mike. Welcome aboard, Mike. We’re happy to have you here. You fit right in.