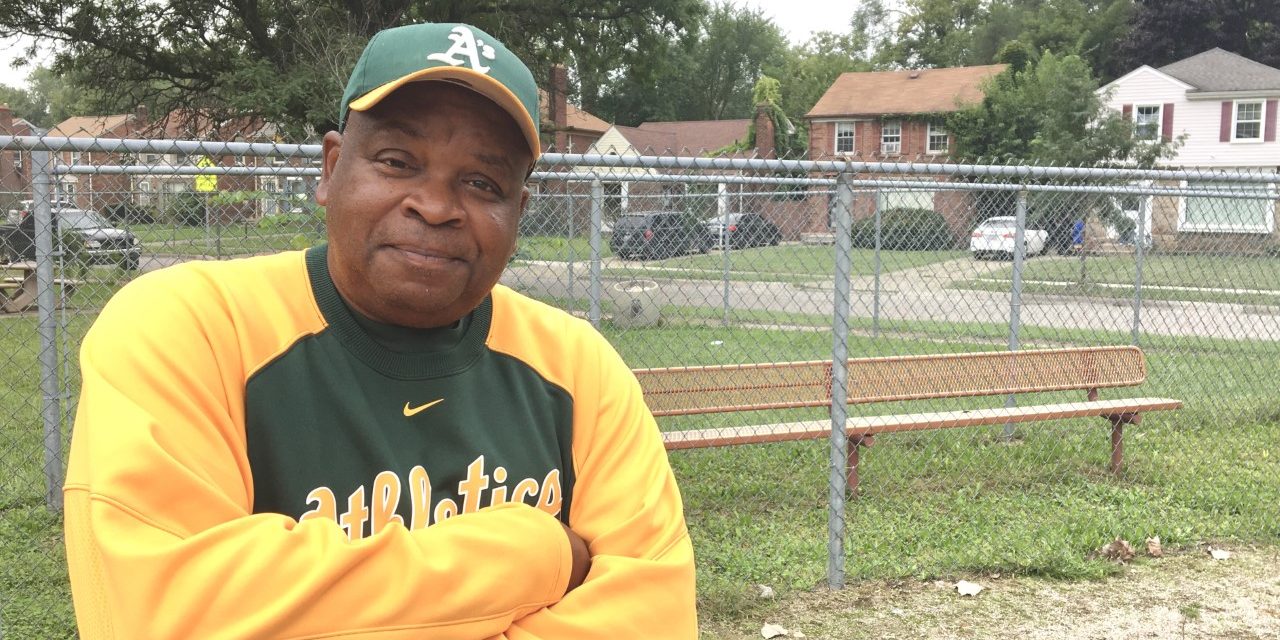 Ed Smith moved to his home in Grandmont in 1983, right across the street from Ramsay Park, a large park that has a large picnic area, mature trees, permanent picnic tables and benches, a playground, and a baseball diamond. It didn’t have all these amenities when Ed moved in though, and it didn’t look as well kept as it does today. After Ed’s three children were born, he started eyeing what was then the overgrown baseball field at Ramsay. “The infield was all grass. You couldn’t see the diamond,” Ed remembers.

When Ed signed his kids up to play Rosedale Grandmont Little League (RGLL), he signed himself up as well. Ed has coached at every level, from tee-ball right on up to the oldest players at 17. Ed coached all three of his kids, two girls and a boy, all during the same season. “There were weeks when I was on a field seven days a week,” Ed says. He also remembers loving just about every day he was on the field. The field at Ramsay is used mostly for the younger teams. The older players head to Stoepel Park for their games. Saturdays at Stoepel during the RGLL baseball season are busy, full of parents, coaches, umps, and players. Many lifelong friendships between players on the same team and opposing teams have formed on those diamonds in the spring. Many parents in the audience cheer not just for their own kids, but for the many other players, often on opposing teams they have watched grow from tee ball through coach pitch to softball or baseball. Players in the league often start at four years old with tee ball at Ramsay or another smaller field, then they learn how to eye a pitched ball, moving to the junior then senior league. Once they age out, some become umpires, and sometimes they become coaches themselves. More than one parent has grown up in the league, playing for several years, then introducing their own kids to baseball, either cheering them on from the stands or as a coach from the third baseline.

TEACHING HOW TO BUILD COMMUNITY WITH RGLL

While all of Ed’s children played ball at many levels for many years, his daughter Scherrie became a serious player. Ed thought she’d make a great short stop, and so that was the position she played when he coached her team. Until there was a no-show from the team’s pitcher. “Dad, I want to pitch,” Scherrie told him. “I told her ‘No, you’re a short stop.’ But, without a pitcher, we didn’t have a game. I had no choice,” Ed says. “She did ok, but the important thing is she kept practicing.” Scherrie’s practice field was across the street at Ramsay Park. Her practice and insistence that she would pitch paid off. Scherrie pitched her way to a four year college athletic scholarship to St. Paul’s College in Virginia. She pitched all four years there and by the end of her four years had quite a following. Ed’s kids are grown and gone now, but Ed encourages all of them, especially Scherrie, to think about coaching. “You got to give back,” he says. Rosedale Grandmont Little League, the players, parents, coaches, and umpires all worked together to make for some great Saturday afternoons. For many players and parents, those Saturdays encouraged the habit of working in community.

Even though Ed doesn’t head out to coach baseball any more, he still keeps his eye on Ramsay. The weeds in the infield will come regardless and so will Ed. “I look after it,” he says. “It’s a jewel. My whole family got something out of this park, out of keeping up the field, out of coaching, out of playing ball here. I keep it up because it’s a necessary part of being in a neighborhood. It’s what I do.” Ed’s not alone in looking after the park. Neighbors Robert and Diane Patterson, Marvin Washington and Lorenzo Blunt all come out to pick up litter, rake, and look after the ball field. GRDC sponsored an outdoor family event, “Movie in the Park!” at Ramsay Park last summer, and, with the help and input of Ed and Lorenzo, the event was a great chance to build community. Several families from all over Grandmont Rosedale came out with their kids to watch a movie under the stars.

This past fall, after the cancelled 2020 season, Ed watched a young couple with two little girls head across the large lawn and ball field of Ramsay. They were headed to the playground, the little girls kicking leaves and laughing as they ran, their parents not too far behind. “That’s why I do it. Those people right there,” Ed said. He didn’t know their names, at least not yet, but he could see that the park was important to them, that it made a difference to that family, just like it did for his.

Ed’s working on drumming up some enthusiasm for the 2021 girls softball season. He has a four year old granddaughter whose mother is Ed’s middle daughter, his catcher. You can bet that his granddaughter is already familiar with the feel of a ball and has had not a little practice rolling it around. While Ed waits for the 2021 baseball season to start, he has been attending meetings with GRDC’s Community Engagement Manager Kitty Yarbrough to hopefully acquire funding to add more amenities to Ramsay Park, his “jewel.”

One of the most telling attributes of people living in a strong, vibrant community is that they don’t wait for someone else to fix, beautify, or advocate. They, like Ed, see a need or a problem and begin to think of ways they can solve it.

To find out when the next Movie in the Park! event is, sign up for Grandmont Rosedale Development’s weekly, Wed. morning eblast. Email your request to Kathy Garrett: mailto:kgarrett@grandmontrosedale.com.