Loyal to Your Soil Artists Create Public Art at Stoepel 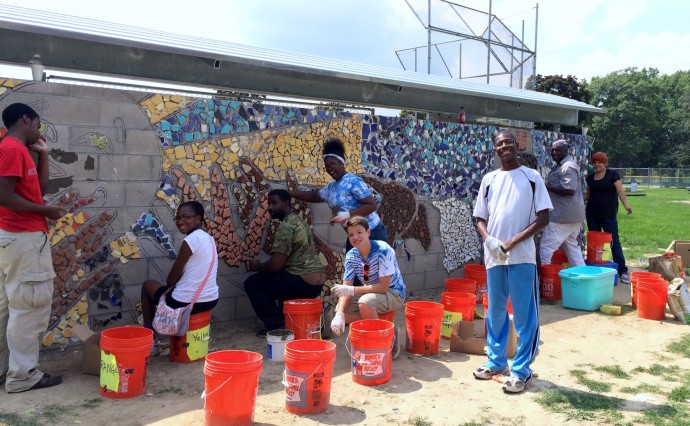 Want to know what Peck Park on Brush Street, the pedestrian bridge over 75 in Southwest Detroit, the Atheneum Hotel, Children’s Hospital, the Federal Reserve Bank, Campus Martius, the Detroit Athletic Club, and the Tabernacle Missionary Baptist Church have in common?  They all contain works by world renowned Detroit artist Hubert Massey.  As of this summer, Stoepel Park can be added to that list!  As the final project of GRDC’s 10 week Loyal to Your Soil Youth Arts Program, Hubert, along with a great deal of help from the kids in the program, installed a mosaic on the exterior wall of one of the new dugouts.  The kids were involved in the entire process from the development of the idea for the mosaic, to the breaking of plates, tiles and pottery, and finally to its installation.  For many of the youth, this project was their favorite.  It was especially fun because they were aware of its importance as a major work of public art in their own community, that they helped create.

Before he creates public art Hubert asks the community about “their ideas of how they want to see their community portrayed.”  When Hubert asked the arts program kids what they wanted, the kids said they wanted a baseball theme, a happy day, and lots of different kinds of kids.  When you stop by Stoepel off of Westwood you will see the kids’ vision realized in blue, yellow, orange, and white:  a baseball player, sporting a Detroit ball cap is throwing not a ball but the sun while hands of many colors reach to catch it.  According to Hubert, the mosaic was “totally inspired by the kids.  They all seem to like it.  This was a big experience for a lot of them.”

Hubert knows a thing or two about creating things that are big.  In fact, most of Hubert’s work is large-scale.  When Hubert cites the dimensions of his work as 30 x 30 or 6 x 47, he means feet, not inches.  He prefers the big projects.  In fact, Hubert’s first training as an artist prepared him for such large scale and long-term projects.  Before he graduated from Grand Valley State University with a degree in art, Hubert was hired in Detroit as a billboard sign painter.  Back when billboards were hand painted, Hubert climbed up above freeways and on the sides of buildings and painted advertisements.  He became a sign painter on the advice of one of his mentors (who himself was an assistant to Diego Rivera), who told Hubert that if he really wanted to learn how to draw, he should become a sign painter.  As a journeyman sign painter not only did Hubert learn how to draw, he also learned how to run a crew of people which is what he does now with his public art work.  “A lot of disciplines come together when you create public art,” says Hubert.  Structural engineers need to be involved to be sure the structure can hold the art, architects need to be there as well and painters, fabricators, tile setters, laborers, and of course, the artist.

The young artists from Grandmont Rosedale aren’t engineers or architects (yet), but they were willing and able workers.  After the young artists came up with the idea of the baseball player throwing the sun, but before they started to construct the mosaic, Hubert drew “a large cartoon” of the artwork on the wall of the dugout.  Then the kids filled in the drawing with the different colored pottery pieces and, as a group, created a whole, a mosaic that will be a part of Stoepel, a part of the Grandmont Rosedale community for years and years to come.

Hubert Massey offers bus tours for people who are interested in seeing his many works of public art around town.  That bus tour might soon include a stop in our community, at Stoepel Park to see the mosaic that Hubert Massey and the kids from GRDC’s youth arts program made together.   This project was funded by:  Knight Foundation, Fisher Foundation, MI Council for Arts & Cultural Affairs, and ACCESS. 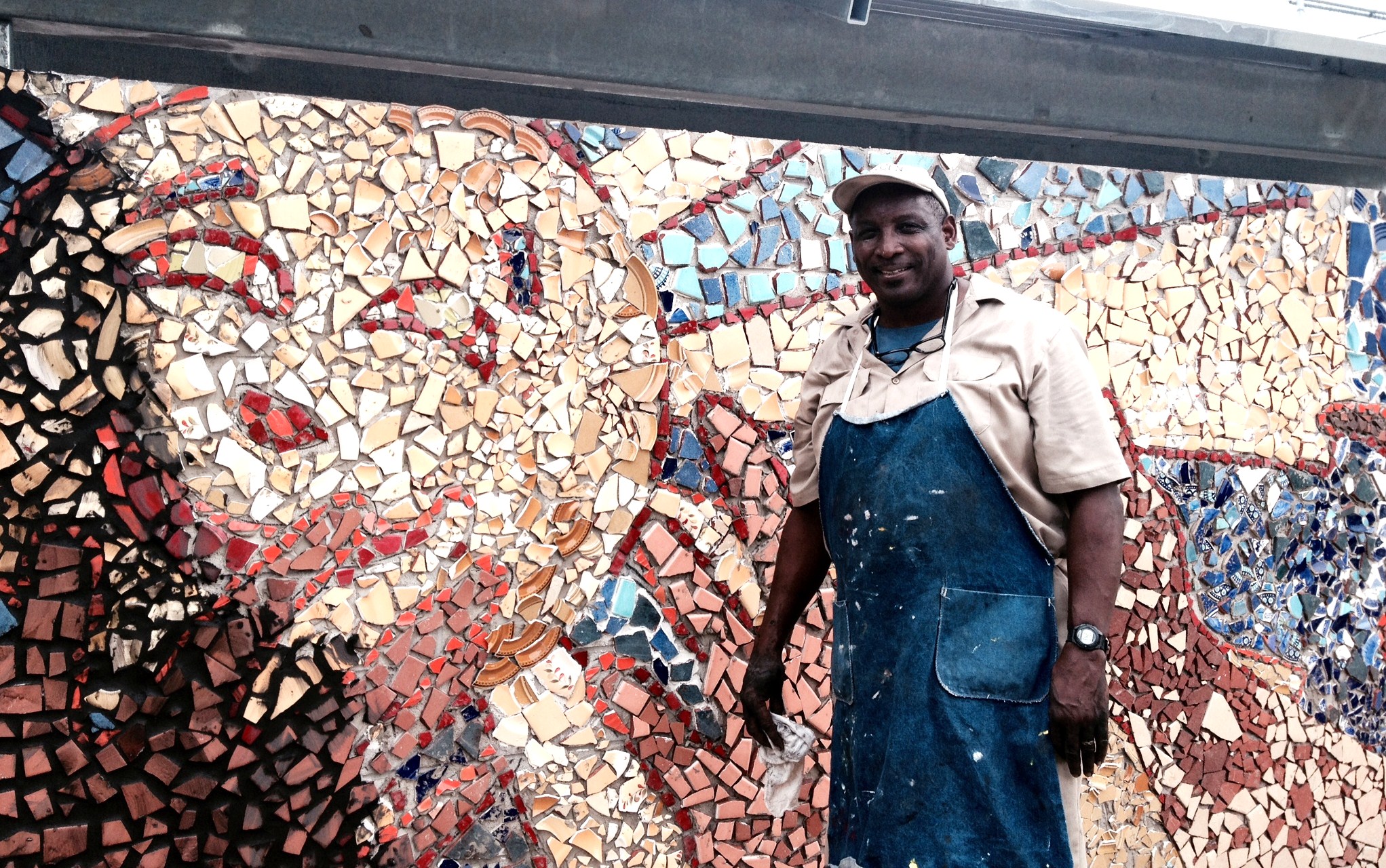