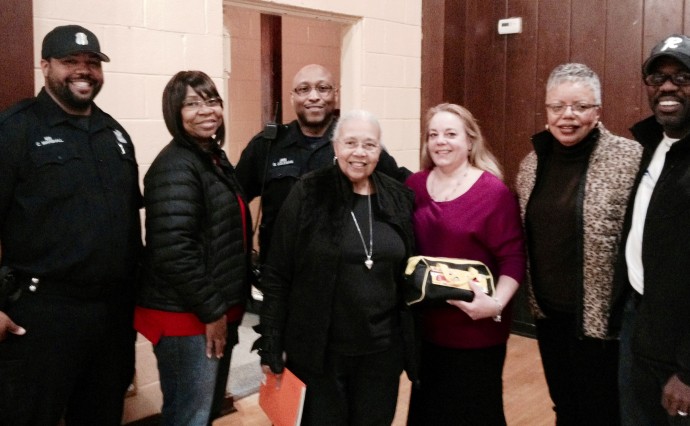 Sponsored by the Grandmont Rosedale Development Corporation’s Crime Prevention Task Force, residents from the northwest Detroit gathered at the North Rosedale Park Community House on April 24 to hear 6th and 8th precinct Officers Marshall, Coleman and Childrey address residents’ concerns.  Questions from surveys submitted previous to the meeting were first answered by the officers.  Residents raised such concerns as how to report suspected break-ins, who to call about incessantly barking dogs, suspected squatters, blight, and code violations.  While the police officers provided residents with the appropriate numbers to call, flyers were also available with phone numbers listed specific to residents’ concerns.

The officers reported that several areas of crime were down in the 6th and 8th precinct, such as sexual assaults, burglaries, larcenies and stolen vehicles, but that carjackings and aggravated assaults had increased.  Office Childrey indicated that most carjackings happened at gas stations and that women were most often the targets.  In response to this increase, Office Childrey advised all residents to frequent gas stations that were well-lit and clean.  Office Childrey also strongly encouraged anyone pumping gas to have his/her money, credit/debit card ready before pulling up to a pump rather than spending time at the gas station going through a purse or wallet.  Residents were encouraged to stay off their phones when pumping gas as people “tend to hold their cell phones with their strong arms which leaves them vulnerable, and people are simply distracted when they are on the phone,” as Officer Childrey stated.  No valuables should be left in cars, and residents should avoid gas stations where they can see people who are just sitting in their cars not pumping gas.

Lessons Learned from the May Neighborhood Safety Meeting will be posted soon, check back!