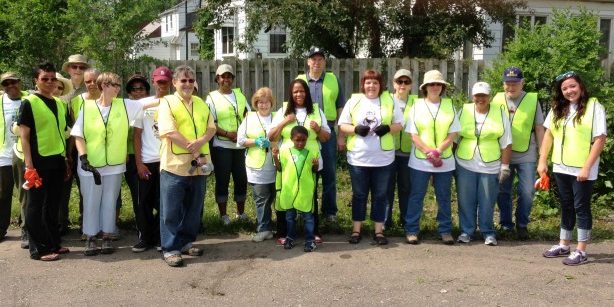 The new initiative of the “Love Where You Love” anti-litter campaign, Trash Talkin’ is coming to a close this Saturday, August 24th. Don’t miss out on your chance to participate!

The “Love Where You Live” anti-litter campaign was launched in early 2013 as a means to combat litter and illegal dumping activity in the Grandmont Rosedale community. The campaign focuses on large scale clean-ups, small litter cleaning activities and resident involvement. LWYL encourages residents to take an anti-litter pledge with the promise to be litter free. This anti-litter initiative spurred Trash Talkin’.

Held twice a month, the Trash Talkin’ cleanup series kicked off on June 15th. Volunteers met for coffee and conversation for an hour and then cleaned a targeted location. Since the launch Trash Talkin’ has recruited 79 volunteers who have contributed over 145 volunteer hours, picked up 27 bags of litter, recycled 5 bags of recyclables and cleared 23 bags of yard waste. A time lapse video of hard working volunteers was filmed, edited and produced by Grandmont Rosedale resident Richard Castillo can be viewed here:

If you haven’t been able to participate in a Trash Talkin’ event, you haven’t missed your chance. Join us on Saturday, August 24th at Always Brewing Detroit, 19180 Grand River Ave Detroit, MI 48223, at 9 AM for (free) coffee, conversation, and supplies – clean-up commences at 10 AM.  Special guest, State Rep. David Nathan will also be joining the efforts as a part of the community service project, Legislators Building Communities.

*Trash Talkin’ was originally scheduled to continue until the end of September, but due to a community conflict this Saturday, August 24th will be the last Trash Talkin’ event for the summer. Trash Talkin’ will continue again next year!