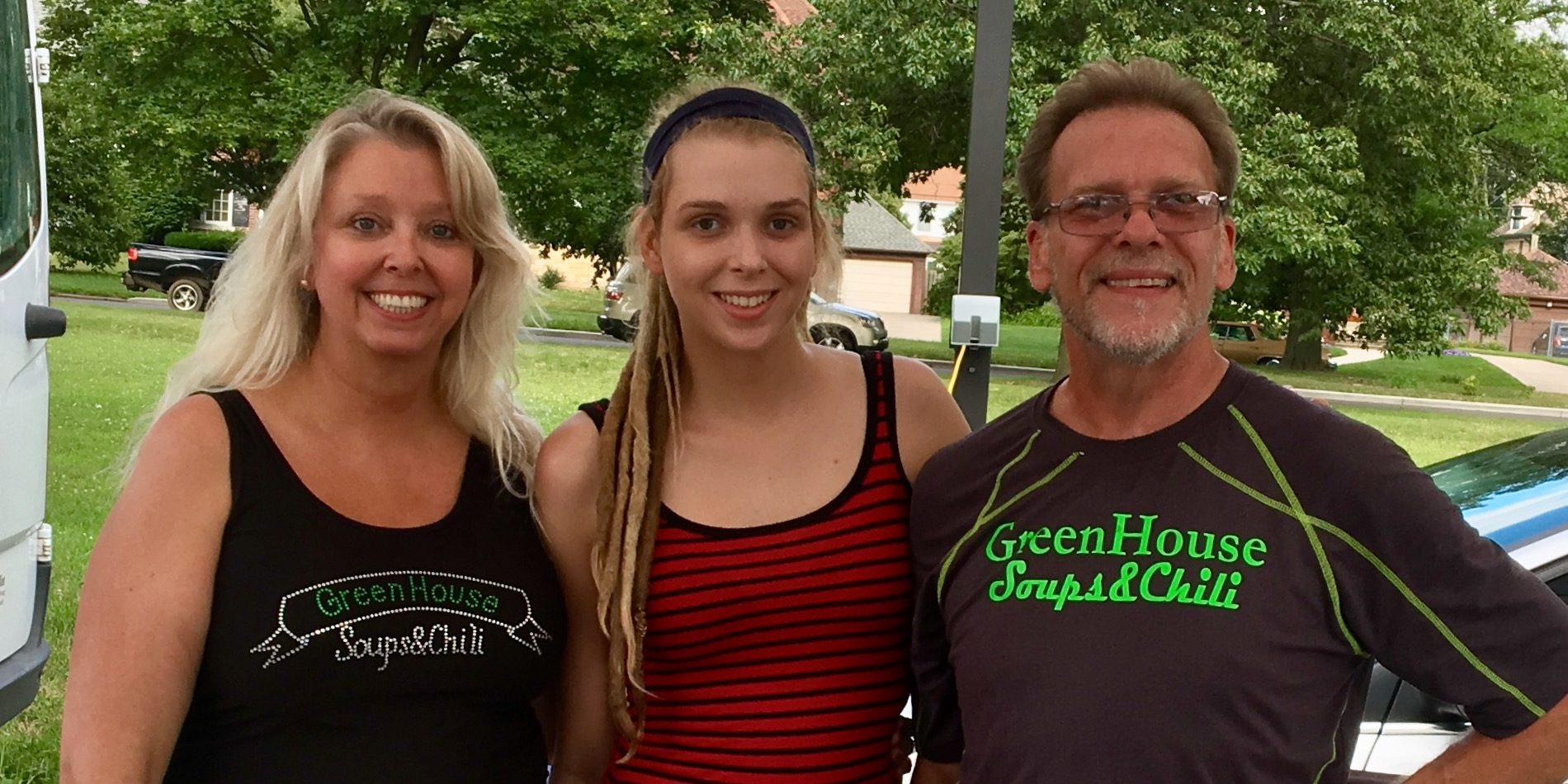 At age 50, Jane Bate found herself in the position of having to reinvent her professional life. Jane was a very successful manicurist at a neighborhood salon in Allen Park. She had a large and loyal clientele, and she lived about a block and a half from the salon. It couldn’t get much better. Then, in 2013 Jane slipped and fell on some ice. After three wrist surgeries and 16 casts, Jane realized she had to start over. “What else do I know how to do?” Jane thought. “I cook, clean, and take care of kids.” Jane opted for cooking. Besides being known as a skilled manicurist, Jane was also known as “the mom with all the kids in the green house who knows how to cook in those big pots.” Jane brought one pot of chili to the Allen Park Farmers Market, and the community ate it up. The next season, Jane brought a pot of chili and a pot of split pea soup, and that too sold out. The next season, Jane brought her chili and potato leek soup and a couple of other soups to our Northwest Detroit Farmers’ Market and quickly made a name for herself here.

This is Jane’s second year at our Farmers’ Market, and GreenHouse Soups and Chili is a great addition. When you stop by Jane’s booth, you may meet Steve, Jane’s husband of 35 years. A retired auto worker, Steve enjoys coming to the Market. “I love this neighborhood! The diversity of older people, younger, black people, white people, and the longevity of the community is wonderful!” You might also see Shelah, Jane and Steve’s seventh and youngest child. Shelah has expressed an interest in her mom’s business and is in favor of opening up a restaurant. Jane likes the idea, too, but wants it to be like an extension of her kitchen, to feel like a community, like home. “It’s not going to be 32 flavors of soup,” Jane says. For now, though, Jane is plenty busy with her Thursdays at our Market, bringing her soups and chili to TechTown on Wednesdays, and supplying several local bakeries, such as Good Cakes and Bakes, and cafes. In fact, she’s talking to Cody Williams, owner of Always Brewing Detroit, about bringing her soups and chili to the coffee shop once the Market season is over.

“The Lady in the Green House”

During the early years of her new career, Jane received training at FoodLab Detroit. Every business owner needs a brand: an identity that distinguishes that business as unique and memorable. Like her process of figuring out how to restart her career, Jane thought about what she knows best. Since she was known as the “lady in the green house,” the logo and name for Jane’s business is GreenHouse Soups and Chili. Jane’s recipes for her soups and chili are her own, with input from the community. Her potato leek soup used to contain pork, but after hearing from several customers that they would love to try her soup, but did not eat pork, Jane eliminated the pork and added spicy chicken instead. Jane also offers potato leek with mushroom, barley chili, garden vegetable, and red lentil scoop, which is a vegan dip. Several of her soups are gluten free as well as vegetarian. All are small-batch, hand crafted, and primarily locally sourced. Just a couple of years ago, Jane bought all the in-season white Michigan potatoes she could find at the grocery stores for her potato leek soup. That didn’t provide her nearly enough so last year she asked Eastern Market to put aside 1000 pounds of Michigan white potatoes when they came in. She ran out of those too. It’s clear that for many people, nothing beats a good bowl of soup.

It wasn’t just Jane’s skills as a manicurist that lead to her successful career in a salon, and it isn’t just because Jane’s a great cook that her soups and chili business has taken off. Jane is fundamentally interested in nurturing community. This understanding of the necessity of community came early. Due to tight finances and family issues, Jane grew up hungry in Melvindale. She was dependent on the school system for many of her meals. She married young, had 7 kids, and learned how to coordinate limited time and money in order to put a good meal on the table. The skillset was necessary to thrive in spite of poverty.

Jane’s GreenHouse Soups and Chili and quadrupled in the last three years, but this did not happen only because Jane can make a great bowl of soup. Jane’s skillset includes listening to her customers, and then adjusting her business to the wants and needs of the people who love her soups. Community is relationship, not a solo act. For Jane, community is built one bowl of soup at a time.

For more information, contact Jane at 313.205.0376, JaneBate61@gmail.com, or visit www.GreenHouseSoupsandChili.com.