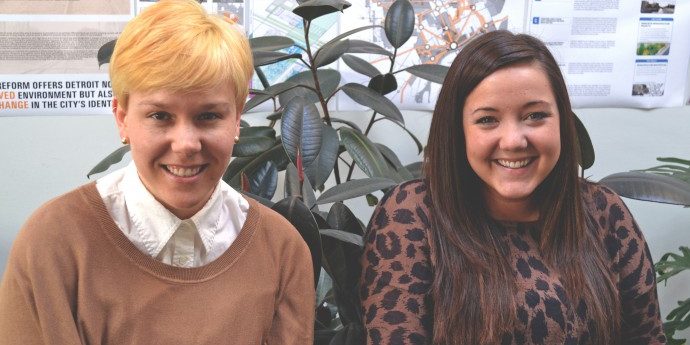 GRDC has two new team members this year – Liz Wroughton and Chelsea Neblett. Both Liz and Chelsea are AmeriCorp Vista members and will serve a year with GRDC. We are very excited to have them and hope everyone sees them out in the community soon.

Liz Wroughton is a 2010 graduate of Calvin College, in Grand Rapids, MI. She got her Bachelor’s degree in History and Gender Studies. After graduating from college she worked for a refugee resettlement agency in Grand Rapids, and then moved to Detroit in order to live closer to family. She moved to Rosedale Park during the Fall of 2012, and was so impressed with the community and the work of GRDC that she immediately began looking for ways to get involved.
She began an AmeriCorp VISTA term in January 2013 and has been working with Karen Johnson Moore, Community Security Program Manager, on a variety of projects related to public safety, and crime prevention. Elizabeth will also help coordinate the campaign to collect the signatures of 51% of the Grandmont Rosedale Community in order to ratify the Neighborhood Benefits District. After her year of service is over, she hopes to pursue a master’s degree in Social Work and Public Policy.

A native Michigander, Chelsea recently returned to Michigan after a brief stint in Chicago. Chelsea is currently pursuing her Master’s in Urban Planning at Wayne State University – she attended Michigan State University as an undergrad where she studied Public Policy and Public Administration. After relocating to Detroit in August 2012, she was eager to get involved within the GRDC community and jumped at an opening through the AmeriCorp Vista program. For the next year Chelsea will act as the Volunteer and Outreach Coordinator. In addition to volunteer recruitment and coordinating volunteer activates to support all sustainable communities programs, she will also facilitate the new community portal – mygrandmontrosedale.org.