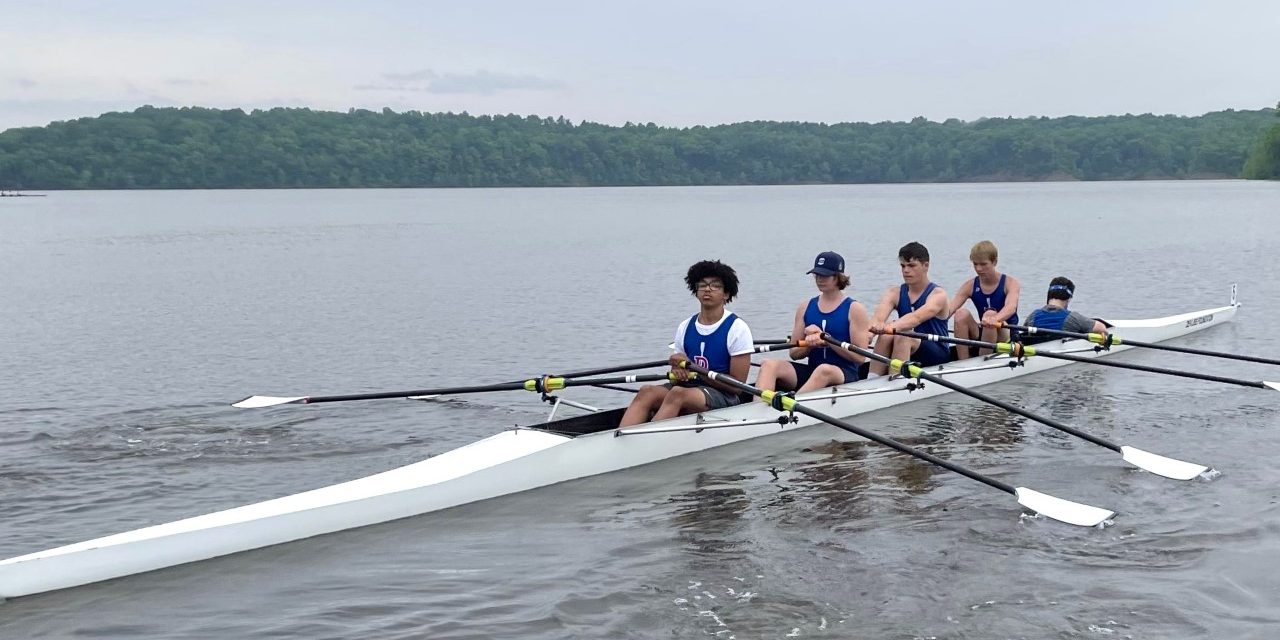 Ethan Kent’s mom Renee Kent thought it might be fun to check out the Community Rowing Day at the Detroit Boat Club on Belle Isle about a year and a half ago. People of color are underrepresented in rowing, so it seemed a great idea to find out more about the sport. “What Renee and her son Ethan found out was pretty interesting: the Detroit Boat Club’s high school program draws kids from all over the Detroit area, some high schools consider rowing a school sport and students can get a letter, and, most importantly, Ethan discovered that he really liked rowing. Ethan signed up to join this past spring season and has been getting up early, out on the water ever since.

There are four seasons to rowing. In the winter, the team is only “erging,” which means the crew is on the rowing machines. They can perfect their technique and strength with read outs of their pull force. Come spring, the team relies on muscle memory to slice through the choppy water of the Detroit River. “It’s fun and painful,” is how Ethan describes rowing on the Detroit River. “Most days for the afternoon practice, it’s choppy. If it’s too choppy we won’t get a good row.” As the member with the best technique on his team, Ethan sits in the stroke seat. He is also the only Detroiter in his boat. Most often Ethan is in a quad, a four-seater boat, with a coxswain – the team member who cheers (or screams) the members on and lets them know when to “take the power up”.

”Everyone needs to pull their own weight” is literally true on a crew team. On the water, the team pushes each other to pull harder, and often people on Belle Isle cheer as they go past. While Ethan explains that the sport of rowing is mainly about technique and muscle, “a leg sport,” in order to win a race or regatta, “you have to want to win.” Besides Ethan’s four man scull, there are 8 person boats, and 2 person, or double, boats. There are girls’ as well as boys’ teams. The more people in the boat, the faster it goes. When getting ready for a regatta, Ethan has two-a-days – practice from 5 – 6:45 am, and again from 4:30 – 6:15 pm. He and his teammates have had a good deal of time to get to know one another, to form as a team.

If there is no thunder or lightening or more than a 15 mile per hour wind on the river, they row. They’ve rowed in 28 degree weather (there are no gloves worn when rowing). Rowing on the choppy Detroit River has been instrumental in forming a bonded, strong team. Ethan’s crew has competed in Cincinnati, Tennessee, and nearby Orchard Lake. It was at the Orchard Lake regatta where Ethan’s crew saw their advantage of practicing in the challenging Detroit River. Ethan’s crew took one look at the members of competing crew and immediately thought “Oh no! These guys are huge!” Ethan was 14 at the time, and sinewy rather than bulky. It was a choppy day on Orchard Lake, and that made all the difference. They won “by quite a bit,” Ethan smiles.

GETTING READY FOR THE NATIONAL CHAMPIONSHIPS

The Detroit Boat Club is the oldest rowing club in North America. Established in 1839, the Boat Club is also a member of the Detroit Regional Yacht-Racing Association. Rowing on the Detroit River has strengthened and vexed decades of rowers. Ethan’s reasons why rowing on the Deroit River is challenging have probably not changed for decades of rowers: “The weather can change quickly, equipment can malfunction, and you can catch a crab,[that’s when the water takes your oar – an issue in choppy water].”

When Ethan first started rowing, he spend a lot of time learning, not so much time winning. His coach at the time wanted the kids to have fun, which Ethan did. Once Ethan and his team had some technique down, they got a new coach who was less about having fun and more about winning, which, according to Ethan, is also fun. They team started to have a lot of fun by winning several regattas, so much so that last May, they competed in the U.S. Rowing Youth National Championships in Sarasota, Florida. Ethan’s team is the only quad from the Boat Club that qualified to compete in the Nationals and the only team from Detroit. Getting ready for a championship means more practice, so they are back doing two-a-days – practice at 5 am and 4 pm. Ethan’s team came in second in their heat out of twelve. While this wasn’t the first time that a team from the Detroit Boat Club went to the national championships, it was, according to Ethan, “the first time in a long time.”

During the summer season, Ethan competed in the Royal Canadian Henley Regatta near Niagara Falls, Canada. Ethan and his many of his teammates were competing against significantly older rowers. Ethan competed singly and came in fourth. Fall season just started, and the rowers will stay on the water until it begins to freeze. Next up is a regatta in Pittsburgh. During the month-long break between summer and fall, while new rowers came to the Learn to Row program,  Ethan was at the boat club practicing. After Pittsburgh is a big race, the Head of St. Charles Regatta in Boston. Ethan will be competing against varsity teams for the first time in a coxed quad: 4 scullers and a coxswain.

Ethan hasn’t had much of a break between seasons, but winning is a great motivator. He does admit to being tired, but he keeps at it because he likes the challenge, the cohesiveness of the team, it’s fun, and besides, “there’s just something about being on the water.”

If you are interested in learning more about crewing at the Detroit Boat Club, check out what their Learn to Row opportunities: https://www.detroitboatclubcrew.com/learn-to-row

To learn what else the Detroit Boat Club has to offer, its history, and more check out their website: https://detroitboatclub.clubexpress.com/