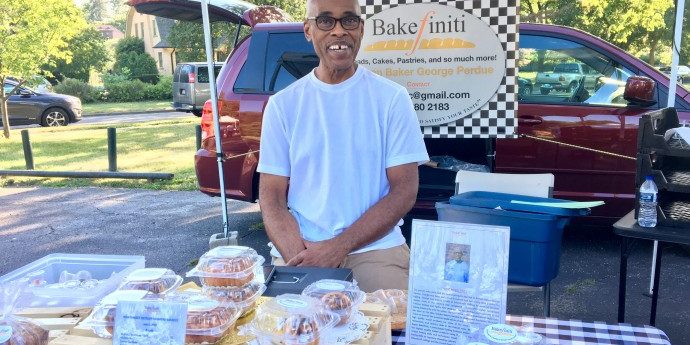 When George Perdue, owner of Bakefiniti and Northwest Detroit Farmers’ Market vendor was a boy growing up in Detroit, he often tried to hang around in the kitchen to watch his mom, aunt, grandmother, and great grandmother bake. “They all baked,” he remembers, “and I’d wait for that spatula, that bowl, that bit of batter left on a spoon.” They’d give him something to taste, but then they’d then shoo him outside so they could focus on their baking. While he was grateful for the treat, what he really wanted was to watch them bake, and to learn. Where’s there’s a will, there’s a way: “I’d go outside, then I’d come back in, find a corner out of the way, and watch.” George never lost his love for baking nor his determination to learn to bake himself.

George always baked at home. He was as supervisor at Chrysler for many years, so he kept his baking mostly to the weekends. After several years, though, George was “ready for something different,” something more serious. While working the third, 11pm – 7am shift at Chrysler, George took a baking class at Schoolcraft College that ran from 11am – 4pm. “I get home from work, sleep a couple of hours, drive to class, and then home again to sleep for a bit before I headed back to work.” George did this five days a week for about five months. The pastry class he took next ran from 5am – 10am. George worked out a schedule with his coworker so he could attend. George would finish class and head immediately to work. No time to nap in between. This class ran four days a week for four weeks. “I was exhausted yes, but when I got to class, I woke right up. When I got home again, I felt as if I got hit by a train.”

Once the classes were over, George’s pastry instructor, Gerald Matthes, owner of Give Thanks Bakery in Rochester, became George’s mentor and continued to teach George for the next several years. At the bakery George also learned about the importance of presentation and about the business end of baking as well. George began baking breads, something he didn’t expect to go into at first. Eventually bread became his favorite thing to bake and eat. “The first time I had a baguette, I couldn’t believe it! The aroma, the flavor! A nutty, sweet taste, and it’s just flour, yeast, water, and salt.” George learned the particular chemistry involved in making a good loaf of bread, and it paid off. He has baked bread for upscale hotels, restaurants and country clubs throughout the Detroit area. “Schoolcraft convinced me that I needed to know about the chemistry of baking. I learned that I had to understand of all of what I serve – the feel of it, the smell, the taste. When you’re baking for high end places, there’s a lot at stake.”

Once he retired from Chrysler, George started Bakefiniti, a home-based baking business that produces high quality baked goods using the finest ingredients. On Thursdays you can find George at the Northwest Detroit Farmers’ Market encouraging shoppers to try a free sample of his mudslides or madeleines. George also offers sweet rolls, conchas, French apple cake, almond tea ring, and shortbread cookies. George’s artisan breads, cakes, and pastries are the result of a lifetime of eating and then making excellent baked goods. George continues to hone his skills as a baker by attending culinary professional development courses at Schoolcraft and, recently, at the French Pastry School in Chicago.

This is George’s second year at the Northwest Detroit Farmers’ Market. It’s a great fit for George. “I love the people here!” he says. “They ask me questions about my baked goods. They really want to know!” George doesn’t have any immediate plans to open a brick and mortar store to sell his baked goods. He definitely knows all the work that’s involved in baking every day and all the business details that need to be attended to, but every once in a while he does think “It sure would be nice to have my own shop…”