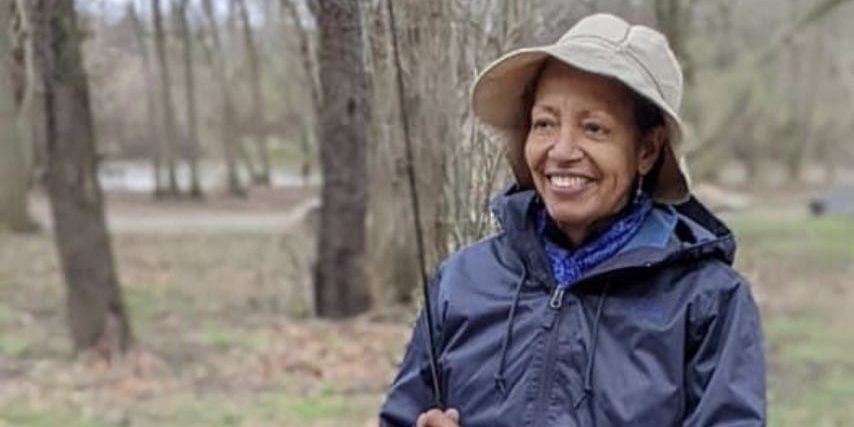 Erma was the kind of kid who spent most of her time outside. Growing up on the northeast side of Detroit, Erma climbed trees, foraged in any green space she could find, found and brought home treasures like bugs and worms, played in the alleys, and came inside only when the streetlights came on. Erma and her siblings spent the summers at their grandparents’ resort in California. It was a pretty great place: people could rent simple fishing boats, pick up bait at the store, grab snacks for an afternoon of fishing, or relax afterward with an ice cream, juke box music, and then head to the rented motel room or cabin. “At first I was the one who collected the worms,” Erma remembers. “At night right after a rain was the best time to collect them. I would go out with a flashlight. There were worms everywhere! I’d get buckets of worms, then I’d load the cups with night crawlers.” When she was about 12, Erma and her sister were in charge of renting out the boats and running the snack bar. From her earliest years at her grandparents’ resort, no matter what her job at the resort for the summer, “we fished!” They were the perfect kind of summers for a kid who loved being outside.

Erma’s goal when she started college was to be a doctor. She loved chemistry and math. Her mother has sinus issues, so becoming an Ear, Nose and Throat doctor made sense. Helping people was and is an important motivation. And then college chemistry hit. Erma regrouped, altered her degree, and got some help in chemistry. She went back to the chemistry department, this time adding Communications to her degree.

Fresh out of college, Erma was a VISTA volunteer in Kansas City, Missouri working at an alternative school, helping kids advance emotionally and academically. “We really did make a difference there,” Erma remembers. In graduate school, Erma focused on Public Administration with a focus on healthcare researching the effects of toxic chemicals on human health. The work was “fascinating,” but a move back to Detroit during the early1980s and the recession got her looking for work. Erma worked with laid off Chrysler workers, helping them with basic classes to get them back in the workforce. She then found work with the City of Detroit’s Job Training and Development working with struggling Detroit Public Schools students, then as an analyst for the State of Michigan for the Department of Social Services in Wayne County. Erma retired after 30 years. She didn’t retire long though. Erma’s experience and skill set made her a much sought after employee. She became the director of the state agency training department. She worked with staff training at a psychiatric facility for convicted felons, as a public health consultant with breast and cervical cancer prevention methods (her favorite), and in several county health departments throughout Michigan with the Health Disparities Task Force. While this was a favorite position, the commute to Lansing became too much. Erma began work in Detroit as a training director for unemployment insurance in Detroit. After five years, Erma retired again.

During those work years Erma also had two children. In 1987 she was in the market for a place to settle down with her family. While she grew up on the northeast side, Erma was open to new neighborhoods throughout the city. What drew her to Grandmont Rosedale was the North Rosedale Park newsletter, The Tattler. “The community has a newsletter!” she thought when she ran across a copy. “That means this neighborhood is organized, committed, and doing things. This is not just a flyer but a regularly issued newsletter with issue numbers and dates!” Erma found a home where she has lived for 35 years.

In between working and raising her kids, Erma also fit in some time to keep up her interest in all things outside. She is a member and volunteer for the Sierra Club Great Lakes Region, she has planted trees with Greening of Detroit, and has volunteered with Friends of the Rouge. Erma started learning about the Erie algae blooms happening at Rondeau Bay in Shrewsbury, Ontario on Lake Erie where her family had property. Remembering her wonderful summers in California, Erma felt keenly what was at risk if the algae blooms weren’t controlled. Building on her chemistry experience and her nearly innate botanical knowledge, Erma knew she had to get involved. Once she retired, Erma became a program volunteer with the Sierra Club Great Lakes Region. The Sierra Club tried repeatedly to hire Erma, but for quite a while, Erma replied “Oh no, I don’t want a job. I’m done working!” They kept trying, and finally, Erma conceded, “Maybe if it were part-time.” “Sign here,” they told her. That was eight years ago. Since then Erma has helped people create rain gardens, and set up rain barrels. She has gone to Washington D.C. to lobby on behalf of green infrastructure. She has stood in Congress to tell stories of fishing with her grandmother, and what being outdoors meant to her. She has been instrumental in the funding of the Great Lakes Restoration Initiative to have healthy water in our area, and has advocated passing of the Clean Water Act. “This is important,” Erma says. “They need to hear the voice of the communities. Erma attends conferences to speak on behalf of clean water, she marches, hands out flyers, works to build relationships with other like-minded organizations, participates in policy roundtables, and works to build a network to make clean water a priority that cannot be ignored or denied. Erma has fished the Rouge looking for deformities in the fish due to PFAS contaminants, helped build a workplan for Ducks Unlimited, is a community organizer with the Sierra Club, and is currently the Board Vice President of Voices for Earth Justice.

While Erma “never intended to work this long,” the importance of her work keeps her involved. Outside is still where she wants to be, but she has taken on some of the responsibility to preserve what it is that she so loves about being outside: “The stars at night, the birds, and trees – it’s quiet. I feel different when I’m outside. I like that feeling.” Erma knows well the more typical relationship of retirement with fishing. Erma is still confident that more time to fish is in her future. “I love to fish. I want to learn to fly fish, I do I do. I’m an angler, heart and soul.”