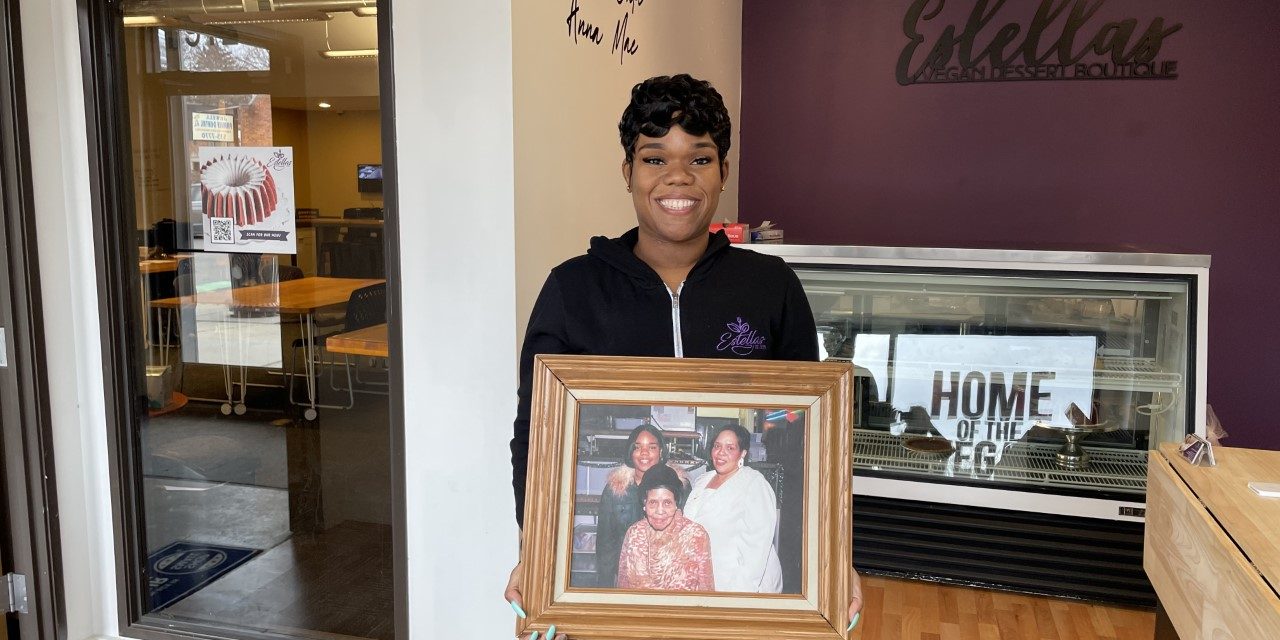 Chantele Jones, owner of Estella’s Vegan Dessert Boutique is proud that her shop is the first and only black women all vegan bakery in Detroit. Grandmont Rosedale Development Corporation is proud that she chose to open her business in a brick and mortar space for the first time in our Grand River WorkPlace pop-up retail space, 19120 Grand River. Since opening in October 2021, business has been so good in this pop-up space Estella’s is staying beyond the usual four month stint. She opened in October and will be at WorkPlace until the end of June. This is great news if you haven’t yet had the chance to stop in to pick up a sweet potato pecan muffin or a slice of white chocolate cake or lemon pound cake. The selection is as broad as it is delicious. WorkPlace is the small business home to several other businesses. Several of these small business owners are especially glad Estella’s is a close neighbor. “Can I have another one?’ is all a WorkPlace member needed to say to Chantele before she wrapped up an oatmeal blueberry bar. He’s a repeat customer who has tried enough to know his favorite.

Chantele’s business has family roots – maybe that’s why it’s so good. Chantele’s mother and grandmother were both bakers and cooks. Chantele named her business, Estella’s after her deceased grandmother who remains an inspiration and guide. “Growing up, I would watch her cook in the kitchen…Everything she made was from scratch, I never remember seeing her use anything from a box.” That’s Chantele, her grandmother, and her mother in the photo Chantele is holding. Chantele’s mother taught her how to make pound cake, and often works at the shop.

Chantele got her start in business early. While she was in cosmetology school, an afterschool option at her high school, Chantele needed some extra money. Some of her classmates sold chips or candy. She started selling mini pound cakes using her mother’s recipe. “I’d bake them and my mom would ice them.” The pound cakes sold like hot cakes. These cakes weren’t vegan though. That idea came later, after she had her second daughter in 2012 and was quite ill. Chantele moved to a vegan diet and her illness cleared up. Chantele has eaten vegan ever since. She has four daughters now. Her girls and her husband all help shape the menu. “They are very honest,” says Chantele. Their honesty will send her back to the kitchen to try again.

Vegan means no animal products are used – no eggs, no butter, no milk. Soy or pea protein based butter is used instead. Soy based cream cheese and powdered egg (which is made from chickpeas), applesauce, and oat milk are other vegan options used in baking. Chantele bakes at the Brightmoor Artisans Commercial Kitchen. That’s where Estella’s first started her vegan baked goods business. When she popped-up in the Brightmoor Commercial Kitchen Café space, the desserts did really well. “The customers didn’t see vegan desserts anywhere else in the city.” Sensing that she might really have something on her hands, Chantele enrolled in TechTown’s Retail Boot Camp, before opening in WorkPlace. The Retail Boot Camp is a 12 week program that helps small business owners get ready to open up in a brick and mortar space. Chantele found the program so useful she is still in contact with her business mentor “I check in every month. I love how connected we are.” Chantele’s mom and uncle helped Chantele build out the space at WorkPlace. The funding she won pitching her small business idea at city-wide SOUP last March enabled her to purchase the furniture she uses in her shop.

STAYING IN BUSINESS IN THE NEIGHBORHOOD

If you visit the website for Estella’s Vegan Dessert Boutique, you’ll see that the name of shop in the logo is actually Estella’s Vegan Cuisine and Desserts. Chantele has had temporary offerings of savory vegan foods, meals that customers can purchase for a limited time. She plans to gradually build her menu to regularly include meals. Traffic in Estella’s in the WorkPlace pop-up space indicates that there is definitely a demand for more. Demand for her desserts is sometimes greater that the supply. Business has been better than good in Grandmont Rosedale, and Chantele has plans to open up her own storefront in the neighborhood: “I want to stay in Grandmont Rosedale so bad! Business has been really good here.” Chantele is hoping that she has found her own spot nearby. Stay tuned and in touch. She’ll be launching a crowdfunding campaign in early May to help raise funds for moving costs and renocations.

Since it opened in October, Estella’s has not just been attracting local customers, but the local and even national media. Here’s a short list of organizations that have stopped by, interviewed, and/or tasted Chantele’s creations: Crain’s Detroit Business, Fox 2 Detroit, Michigan Chronicle, Deadline Detroit, Veg News, VegOut Magazine, the Purple Carrot, and PETA (People for the Ethical Treatment of Animals). Chantele is thrilled and surprised by the coverage. “I kind of expected to be big locally, but certainly not nationally. I couldn’t have imagined such a response!” While the success of her business is exciting, Chantele also has four small kids, so finding a work-life balance is no small thing. “It’s a lot, says Chantele, “but I’m thankful to be actively pursuing a dream and to make it work for my family, my customers, and me.”

Lately Chantele has been working on a vegan German chocolate cake, and she’s got a family of discerning critics to help guide the process. Family support is probably the oldest and best way to find one’s way through difficulty and progress. Chantele sees her grandmother’s name each time she comes to work and she says her name each time she answers the phon. Estella’s Vegan Dessert Boutique is the first, woman, black owned vegan bakery in Detroit. It’s also got a turntable and a bunch of Chantele’s albums. “I’ve always been old school, an old soul.” Estella had a turntable in her home and Chantele feels the connection between her shop, the turntable, and her grandmother. “The turntable makes me think of my grandmother. It makes the shop feel homey. It feels good. And the food tastes good.”

Grand River WorkPlace enabled Estella’s Vegan Dessert Boutique to get a strong start in the neighborhood. The pop-up space is designed to give small business owners an affordable chance to have a brick and mortar experience without a high risk – the opportunity to find out if their retail business idea is a good one. Estella’s Vegan Dessert Boutique is an excellent idea. Estella’s will be in the pop-up space until the end of June. Every now and then, Chantele cooks savory vegan meals, popping up in Grandmont Rosedale, and at events around town. The best way to know where she is and what she’s cooking is to follow Estella’s Vegan Desserts on social media or to visit her website: https://www.estellascuisine.com/