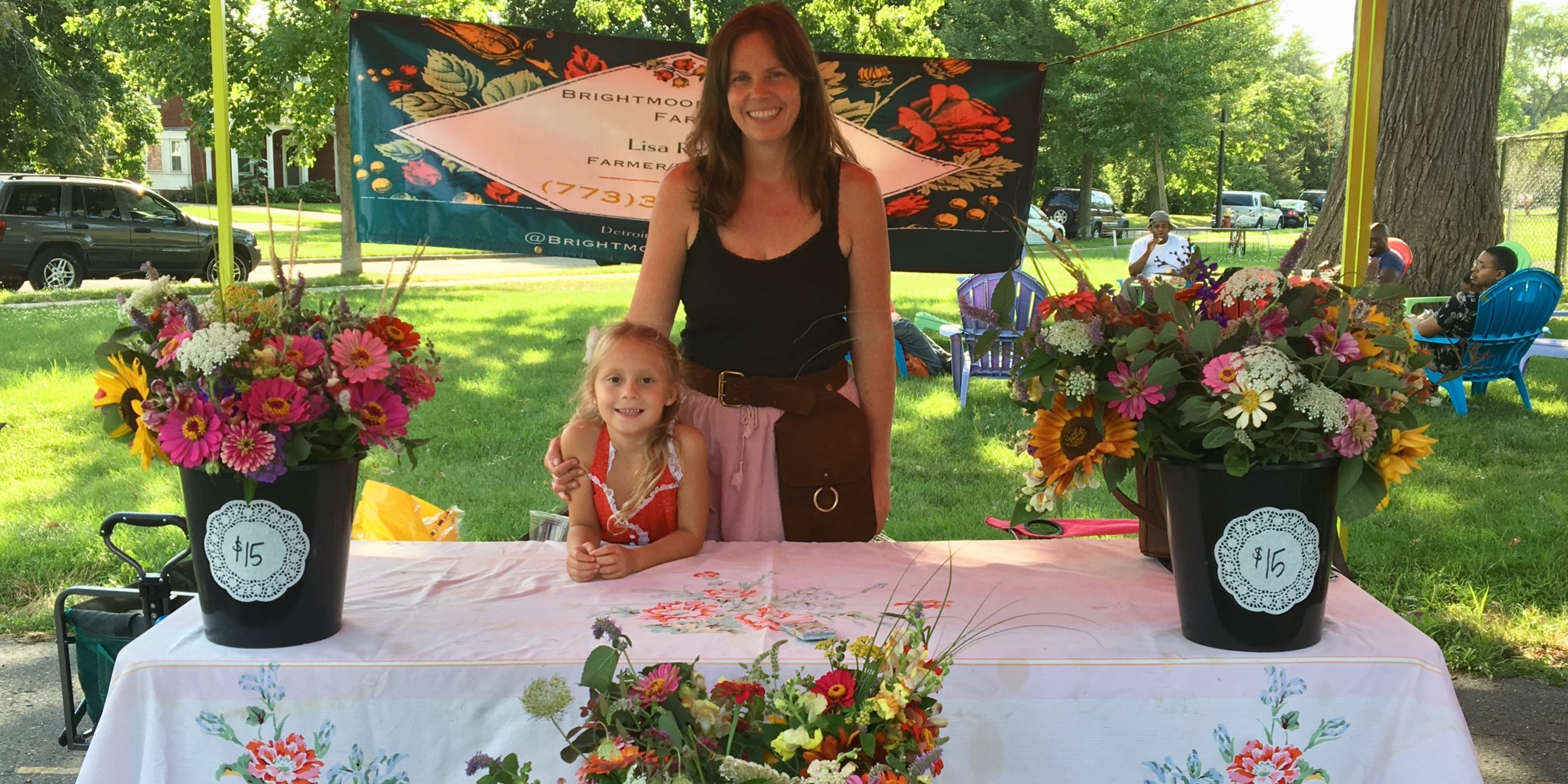 “I love pulling weeds!” is not something you hear too often, but Lisa Rivera swears it’s true, and one look at Lisa’s booth at the Northwest Detroit Farmers’ Market and you know that Lisa has mastered growing flowers. You’ll also notice that she has a gift for arranging them. Much of Lisa’s skill was self-taught, but she has had some inspirations along the way, some of them rather unusual.

Lisa’s gardening life began when she was about six years old. Lisa was caught admiring a neighbor’s garden. “The shape and color of the green beans really drew my attention,” she remembers. “Try one!” her neighbor said and snapped off a bean and handed it to Lisa. “That blew my mind,” Lisa says. “And they didn’t taste at all like beans from a can.” Thus began a lifelong interest in color, shape, and all things that grow.

Lisa learned a great deal about the flower business when she lived above her uncle’s funeral home with her cousin. It was a pretty great arrangement: rent was free if they answered the phone. Not surprisingly, a frequent visitor to the funeral home was the florist who taught Lisa the names of flowers, a variety of arrangements, and about the flower providers. Then for several years, Lisa worked at a flower shop where she learned even more about flowers, tried her hand at arranging, and also heard some not so beautiful information about some flower growers. Lisa also learned what she didn’t like. Highly stylized, telaflora arrangements did not appeal to Lisa. Instead, Lisa thought flowers – wild flowers in particular – were most beautiful when “in their true form.” This is evident in her arrangements which often include the unusual blue of chicory, the delicacy of Queen Anne’s lace, and the rich pink of wild sweet pea. Combined with zinnias, roses, and peonies, these roadside flowers lend a texture and architecture to her arrangements that is uniquely beautiful and something not often seen at a more traditional florist.

Lisa’s knowledge of flowers and her talent at arranging landed her a job at Whole Foods in the flower department. Here Lisa learned about fair trade flowers which ensure that the growers and pickers do not experience the abusive conditions of some flower providers. Lisa met several local flower growers and learned just how to go about becoming a grower and thought that that “Sounded like the best job ever!”

RAISING KIDS AND FLOWERS IN BRIGHTMOOR

Originally from suburban Chicago, Lisa’s interest in becoming a flower grower was simultaneous with her sense of adventure and of doing adulthood a bit differently than what she saw around her. “As a kid I noticed that adulthood seemed to be about work, work, work, and not much else.” When Lisa and her husband Robert had Violet, now 6, they began looking for an alternative way of living, a life in which they could do what they loved and spend time together as a family. Lisa became involved with World Wide Opportunities on Organic Farms (WWOOF), a world-wide organization which connects volunteers with organic farmers, which lead her to Beaverland Farms, one of the farms in the Brightmoor Farmway. Almost immediately, the Farmway, its farmers, and residents, “felt right. We were very welcomed,” Lisa says. Lisa and her family rented a house and a lot in Brightmoor, and started growing flowers. They knew they had found where they wanted to be and so were looking to buy a house as well as a bit more land to garden. The house across the street went up for sale, as well as three adjoining lots. As Lisa says, “Everything just fell into place.”

Lisa’s life as a flower farmer enables her to spend a great deal of time with her now two children – Arlo is 2. Lisa starts the flowers from seed in her hoop house in March. The sprouts are then transplanted in May. The first time Lisa grew in Brightmoor, she knew she had found her perfect place to nurture flowers as well as her children. She had informally estimated the amount of seeds to plant for the space she had, and the flowers fit the lot perfectly without crowding or any unused spots. If you follow Brightmoor Flower Farm on Instagram, you will see that Lisa’s kids are an active part of the farm, watering, weeding, skipping, running, and making the snapdragons snap. Lisa’s business is growing nicely as well. Bunches of beautifully arranged flowers raised by a local, independent grower makes those arrangements even prettier, and people in and around Grandmont Rosedale have noticed.

“Are those zinnias from your garden?” a Northwest Detroit Farmers’ Market customer gushes as she stops by Lisa’s booth. “Yes they are!” Lisa clearly loves what she does. “Flowers make people bloom. It’s just a fact,” she says – absolutely certain.

Lisa welcomes special orders for parties, weddings, any event really that could use a bouquet or two. She sometimes sells bouquets out of Always Brewing Detroit, and she also offers U-Pick days and Bouquet Workshops at her farm. Lisa is working toward growing and selling herbs and edible flowers to local restaurants. Lisa would also like to offer bouquet subscriptions, so stay in touch with Brightmoor Flower Farm to find out what’s coming up next in the garden. Like Brightmoor Flower Farm on Facebook and follow the Farm on Instagram so you don’t miss out. You can also contact Lisa at 313.420.8743 or lisarivera8012@gmail.com. The Brightmoor Flower Farm will be at the Northwest Detroit Farmers’ Market every Thursday, September 6 and every other Thursday thereafter.