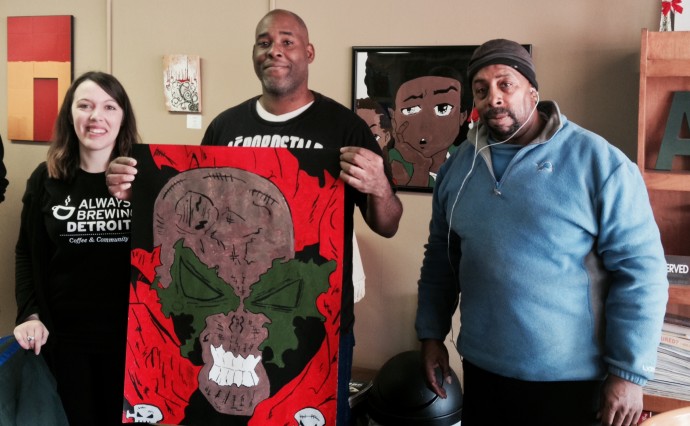 It’s a little over a mile from Evergreen and Grand River to where you get on the Southfield freeway, and Allen Williams walks that stretch about three times a week, all year round. Allen makes a lot of stops along the way. Often his first stop is the GRDC offices where he checks to see how everyone is doing, shares stories about his nieces or his trips to Florida to visit family, and, if we’re lucky, he also leaves behind a drawing. So far, we have fantastic drawings of Sponge Bob Squarepants, Scooby Doo and Mickey Mouse. Allen’s next stop is Belle Tire. Craig, Davon and Kevin work in the garage and welcome Allen with a “Hey Allen, how you doin?” They shoot the breeze, talk about cars and kids and ask Allen how his artwork is coming along. All three already have some of Allen’s artwork – “The Boondocks” is their favorite. Allen is a favorite of Mike’s, the owner of R Barbershop just on the other side of Outer Drive on Grand River. Mike says Allen has been coming by his shop “for about 10 years, and I can’t say enough about him.” Mike has some of Allen’s artwork and sometimes Allen helps out by cleaning up around the shop.  Rosedale Community Pharmacy is next. The pharmacist, Mr. Ibrahim smiles as Allen walks in. “He’s a good guy,” Mr. Ibrahim says, “If I need any help, he helps.” Allen’s artwork is hanging on the bulletin board behind the counter. Amanda Brewington at Always Brewing Detroit knows Allen too, as do many of her customers. Allen’s “Boondocks” piece has been featured in the shop for several months and Always Brewing is where Allen made his debut as an artist at the art opening last summer. From there Allen crosses Grand River and heads to Progressive Johnson Family Insurance Agency where he says hello to Curtis Johnson who says Allen’s “a fixture, and a hell of an artist.” While there, Allen and Curtis reminisce about the old Batman television show and whether Flash or Spiderman is better. Next it’s Game Stop where the manager says “Allen! One of our wonderful customers!” when she sees him walk in. Allen isn’t always there to buy; most often he’s there to check on the manager and Lovell, the clerk, whose son has several of Allen’s drawings. “He’s drawn something for all of us,” the manager says. “He’s an absolute joy.” From here Allen heads back West toward Evergreen. Along the way he waves at the barbers inside Big D’s Barber and Beauty Salon, and then he might head back as far as the Redford Library where he likes to visit Mrs. Wright, the librarian.

Allen is a favorite of everyone he visits along Grand River. He always asks everyone’s well-being, always has a story to share, and he often shares his artwork. And this is Allen’s particular gift. Allen knew when he started drawing at age 10 that this is what he wanted to do for the rest of his life. While in school Allen won several competitions for his artwork and his family couldn’t have been more proud. According to Allen, he is the only one in his family who can draw. Allen’s grandmother is especially proud, saying “Allen might have a disability, but he works and he’s an artist.” Walking along Grand River with Allen Williams is a little like walking around with a movie star – everyone knows him, everyone waves and says hello and everyone can’t wait to see what Allen the artist will come up with next.