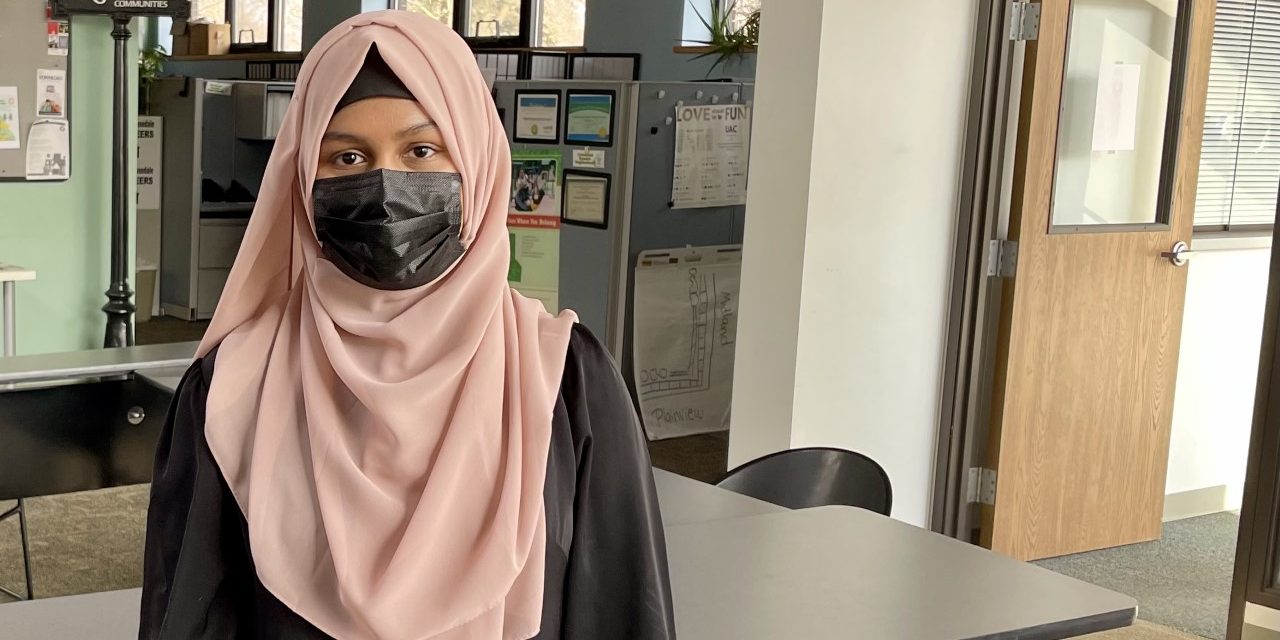 Humiara Shordar began her work-study internship through Urban Alliance in January, and she will be working with GRDC until the end of July. Urban Alliance “provides skills training, mentoring, and paid internships to high school seniors that keep them connected to school or the workforce.” Humiara is a senior at Detroit International Academy for Young Women, and she also works at GRDC up to 12 hours a week. Humiara was ready to get to work just as soon as she arrived. Humiara wrote a Community Blog article about the Neighborhood Safety Meeting held at the end of February, she surveyed Grand River with Economic Development Manager Chelsea Salame in order to update the Grandmont Rosedale small business data base, she continues to research vendors and programming opportunities for the 2022 Northwest Detroit Farmers’ Market season, she will soon help out with marketing for the Grand River WorkPlace, and she has stuffed envelopes, Humiara is very much looking forward to working at the Farmers’ Market come early June. Humiara’s versatility is matched only by her willingness to be helpful, and to learn all that she can. It’s no wonder Urban Alliance thought she’d make a good intern.

Humiara is the third eldest of 10. Her parents moved to Detroit from Bangladesh in 2012 for employment and educational opportunities for themselves and their children. Humiara was 9 years old, and “I don’t know English” was just about the extent of her English. English as Second Language courses, and PBS Kids cartoons, (including Sesame Street), were her greatest help on her way to becoming fluent. The Detroit International Academy for Young Women is a K-12 school. Although it is a small school, about 21 in Humiara’s graduating class, it’s a good fit for Humiara: “There are kids from Bangladesh, Saudi Arabia, Mexico, and Macedonia,” she says. “I have been friends with girls I met there since middle school.”

Before coming to GRDC, Humiara spent two summers working virtually through the Grow Detroit’s Young Talent program. She worked at EcoWorks with the Youth Energy Squad focusing on food, housing, and the climate crisis. She also worked on the Hope Park Project helping residents create the space they envisioned for their park.

PLANS FOR THE FUTURE

At 17, Humiara is just beginning to see where her readiness to learn could lead. She would love to travel one day: “I want to go everywhere!” She’d particularly like to visit Turkey. She speaks some Turkish, having picked it up watching Turkish dramas on YouTube. As a Muslim, Saudi Arabia and the House of Allah is also on her list. She knows Arabic from reading the Koran, but would like to learn more. She continues to speak Bangla with her friends at school, and her year of high school Spanish might prove helpful as well as she travels. Her travel plans will have to wait, however.

At first she thought that she would be a chef, or a teacher. She loved math “until it got too hard,” but her love of sciences, specifically biology, inspired her to apply to Wayne State University’s Nursing School without any amount of certainty that she would be accepted: “I didn’t believe I could do it. Not that long ago, I didn’t know any English.” Humiara was accepted to the Nursing School – with a full scholarship. Her first day is August 30. She hopes to specialize in pediatrics.

Her grade point average and application got her the internship through Urban Alliance. Although Humiara was hoping to be placed in a hospital setting when she applied for an internship, GRDC got lucky. Since she has been with GRDC, Humiara has come to “see the value in networking, making connections, and learning to communicate effectively.” Humiara’s work ethic and genuine enthusiasm for learning will make her a fantastic nurse. While she’s with GRDC, though, be sure to stop by the Northwest Detroit Farmers’ Market on Thursdays from 4 – 8 pm starting on June 2 in the parking lot of the North Rosedale Park Community House, 18445 Scarsdale. Introduce yourself to Humiara, and wish her well as she heads out to make the world a better place.